I really didn’t like Memphis. There, I said it.

Before I arrived into the city, I’d been told to keep my wits about me, because one wrong turn and you could find yourself in a whole lot of trouble (whatever that means). I was staying Downtown which, I was told, is one of the safest neighbourhoods in Memphis. I was also told that the safety of an area was measured by the number of times a police car patrolled the street. Yikes! But even in spite of the po-po, I felt unsafe. Nothing happened to me, but I was constantly being approached, and not by harmless passersby like in other cities, but by men who made me feel very uncomfortable. I was followed one evening, or at least it felt like I was, and I could never completely relax, which was tiring and unenjoyable. I couldn’t walk alone with my camera in one hand and engagement ring on the other and get lost in the city. Had I been with someone else, I would have definitely felt more comfortable, but I wasn’t. I always follow my instincts, and they were telling me to go to Gracelands, get the t-shirt and get the hell outta there. So that’s exactly what I did.

Memphis in May: If you go to Memphis, try to go in May, as they have a month long festival celebrating BBQ, music and all of those good Southern things throughout the month of May.

Museums: Gracelands, the home of Elvis Presley, duh! Locals might say that it’s over-rated, but they would be wrong. I found it fascinating. It’s no longer just Elvis’ house; they’ve created an entire complex celebrating the legend’s life. Rock ‘n’ Soul Museum; The Sun Studios – if you wanted to kill all three birds with one stone, check out the Sun Studios free shuttle that hits these three places and more. The National Civil Rights Museum is a must! Be prepared to spend a good couple or more hours there. I found it incredibly sad and humbling. Brooks Museum of Art; Dixon Gallery and Gardens; Stax Museum of American Soul Music; Blues Hall of Fame

Places: Memphis Farmers’ Market full of food trucks every Saturday; If you’re in Memphis on a Sunday then go to Rev Al Green’s service at the Full Gospel Tabernacle Church; Beale St which is the home of the blue bars (and Memphis’ response to Nashville’s Broadway), Walk along the Mississippi River and make sure you see the ducks at the Peabody Hotel at either 11am or 5pm, which is possibly the most anti-climactic and ridiculous thing I’ve ever witnessed…but it’s a must! Walk around the Cooper Young area, a historically hip neighbourhood, now au fait with Urban Outfitters and vegan restaurants; If you fancy a walk, head to Big River Crossing to walk over a pedestrian bridge over theMississippi River and spit in the river – that’s what everyone is supposed to do, supposedly.

Work out: Crossfit Hit and Run – Justin, the guy who runs it, is super sweet and eases first timers into the class. Downtown Yoga

Catherine and Mary’s Honestly, I was a little surprised that Memphis would have a place like this to eat. Super cool, industrial loft style setting, their menu is the perfect combination of killer cocktails and delicious, light, seasonal dishes. The brussel sprout salad was to die for!

Bedrock Healthy foods with amazing taste. The beef brisket on my salad just melted in my mouth 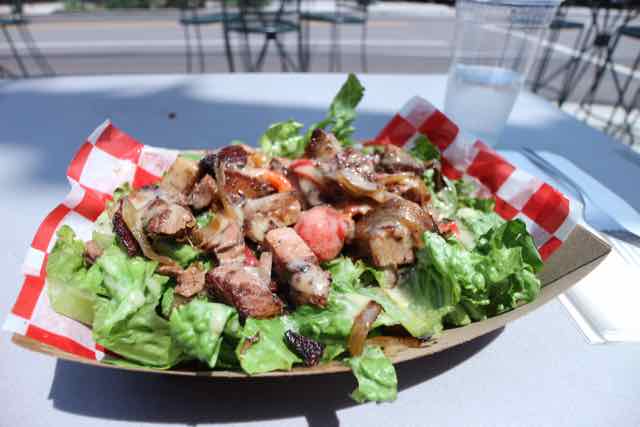 Flight Looks a little too ‘fine dining’ for me, but it comes highly recommended

Central BBQ Best for BBQ and dry-rubbed ribs. Go there after the Civil Rights Museum

387 Pantry Cool lookin’ coffee shop in Stock & Bell fashion and furniture store. You can literally buy the chairs you sit on

BB Kings After the legend himself

Paula & Raiford’s Disco Allegedly the best disco of all time

Wild Bill’s Great juke joint for a night out