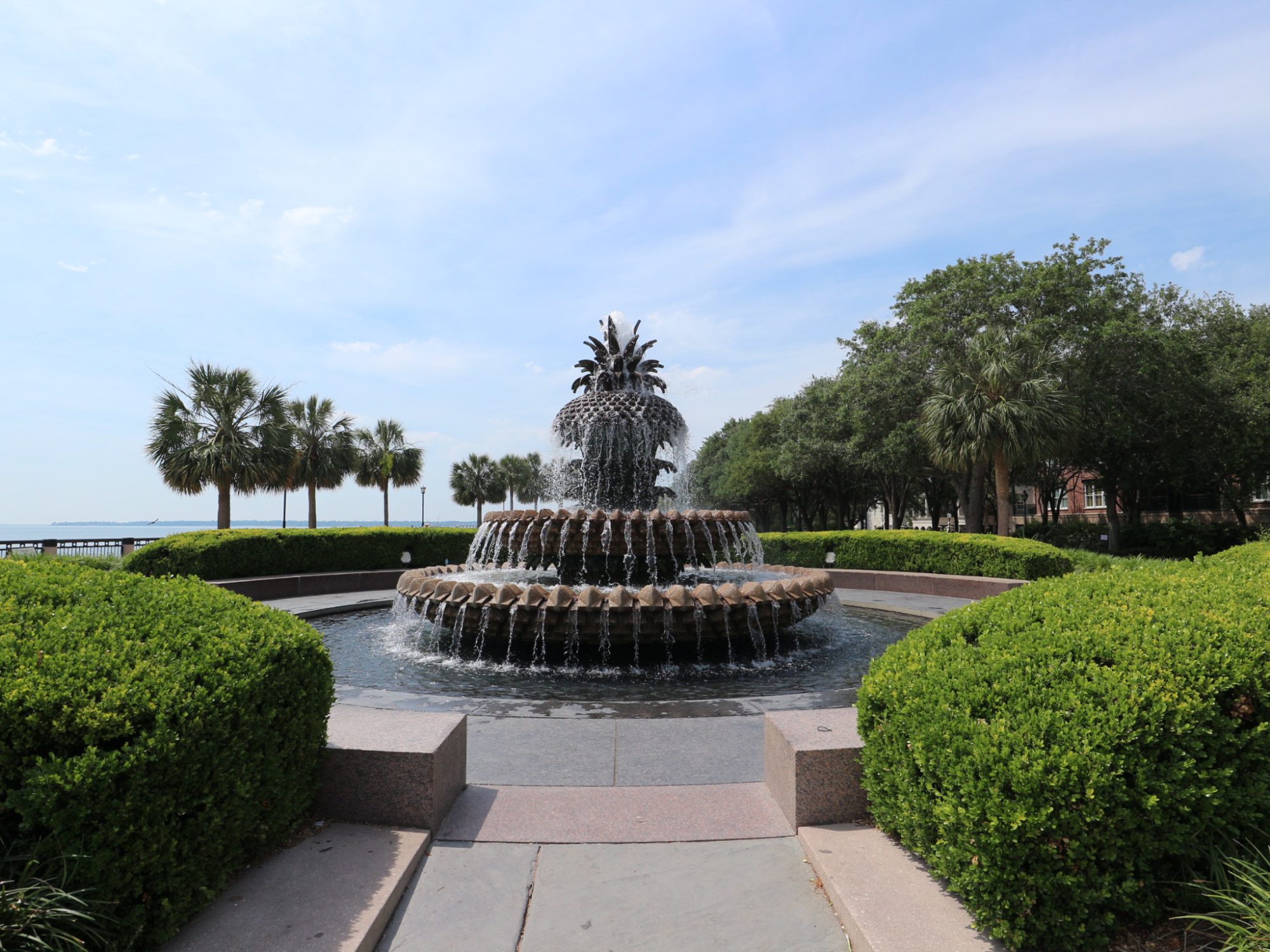 My first impressions of Charleston were based on two things: 1) delicious food and 2) hot guys. The restaurant selection in Charleston is ridiculous given the size of this small city, and the standard of some of their spots is that of New York and London. And the guys here? Woof! Whether it’s overhearing the Southern drawl when walking past a group of guys, or just seeing the muscles on the bike messengers, I was surprised by the number of times I thought, ‘wow, he’s cute, [insert the name of my single best friends] should come here!’ On closer inspection, the women who live here are also gorgeous, with perfectly blow-dried curls and cute cork wedges.

A lot of people say that Savannah and Charleston are identical; and whilst I’ve found a handful of similarities, I actually think they’re fabulously different. Charleston is Savannah’s cleaner, more colourful, manicured, bigger sister.

Places: Walk to Waterfront Park, out on the pier to see the dolphins (if you’re lucky), and the famous pineapple fountain (my favourite fact is that a pineapple is the sign of southern hospitality). Follow the park round until you get to Rainbow Row, which is a row of Georgian houses in pretty pastel colours. Lots of people go ‘ga-ga’ for them, but I wasn’t that fussed. They’re pretty, but so are a lot of other coloured houses. Keep following the water along East Battery and turn right onto South Battery to see some of the most ridiculously large private residence in the city. Dip onto Meeting Street so that you can visit the Calhoun Mansion, which was the house used in the Notebook movie as the Hamilton household (as in Allie’s parents). Make sure you walk down Legare Street to peep through the gates at Cleland Kinloch Huger House and Simmons Edmunds House. Other charming streets to wander down are East Bay Street (from North Market Street down towards water, there’s not much else further up), Broad Street (full of fine art galleries) and King Street which has a mix of cute boutique stores and the usual chains. Wander down North and South Market street for cute boutique shops and sugary snacks, and visit the Charleston City Market. For adventures a little further out of the city centre, walk across the Ravenel Bridge and head to Angel Oak for the best photo opps, with its wide branched canopy that is over 60ft tall

Tours: Bulldog Walking Tours with the awesome guide, Beth Briggs – where you’ll learn awesome facts like how the American ambassador to Mexico, Joel Robert Poinsett, came back from a work trip in Mexico with a beautiful red flower which he planted in the back garden of his home in Charleston in 1829, which then grew into a gorgeous plant, which we now call the Poinsettia! Harbour Cruise Tours; Fort Sumter Tour

Outside of Charleston: A trip to Sullivan’s Island  and eat at The Obstinate Daughter for lunch and get an ice cream from Beardcat; Firefly Vodka Distillery; Charleston Tea Plantation; Kiwah Island; Folly Beach; Middleton Place a national historic landmark and home to America’s oldest landscaped gardens.

Butcher and Bee If you only choose one place to eat, make sure it’s this one! Ridiculously delicious mezze sized dishes, ranging from whipped feta with honey, beet salad, spiced carrots and more. Hands down my favourite place on the East Coast of the US!

Chez Nous A super cute bistro-style corner pub with a small bar area and outside patio. Delicious daily changing menu with flavours from Spain, Italy and Spain, with the wines to match!

Magnolia’s A few people told me to go here to taste some upscale Southern cooking. I went, and didn’t rate it at all. Way too stuffy and the food was not impressive.

The Darling Awesome oyster bar with killer cocktails. If you can, sit at their raw bar (for walks ins only) and see the shucks shuckin’

Leon’s Oyster Shop House in an old car repair shop. Despite its name, go for the fried chicken sandwich, a bucket of champagne, sit outside and bask in the sun.

Charleston Famers Market Every Saturday in Marion Square with over 100 local vendors, mainly food ones.

Husk Look no further! This place was on everyone’s list of recommendations. Stop at the bar for a drink then head next door for Southern comfort food.

Bowens Island Restaurant You’ll need a car to get to this barebones shack, but if offers some of the best beers, fried seafood and trays of Oysters that Charleston has on offer

Fig Their motto is: serve honest, local ingredients, with informed service, in a comfortable setting. Sounds pretty delicious to me.

The Park Cafe A beautiful and bright cafe, great for quiet breakfasts

Sugar Bake Shop This bakery has the air of an old school British sweet shop, lined with glass jars and spearmint coloured boxes

The Restoration Have a cocktail on the roof

The Gin Joint Intimate bar in a 1920s setting

Prohibition Bringing the swing back to King (street)

I could not recommend this Airbnb enough: http://bit.ly/airbnbcharleston

The Restoration (if you don’t stay here, at least go to the roof for a drink)