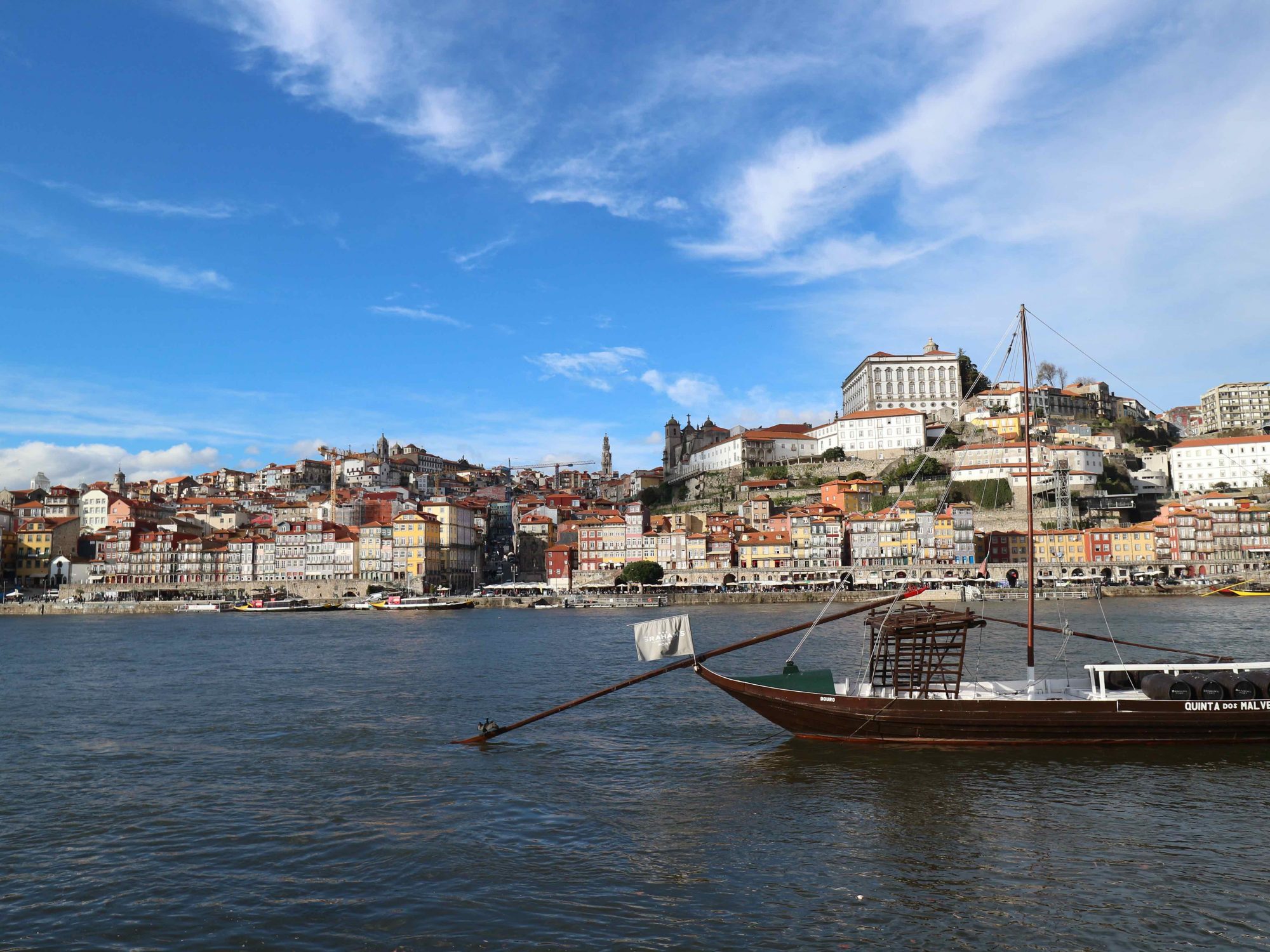 If you haven’t been to Porto, you must. It is unexpectedly incredible. Situated on the Northwestern coast of Portugal, the city is most well know for, well, you might have guessed it: port.

The Douro river cuts the city in two. On one side, called Gaia, you’ll find all of the major port distilleries, including Taylor’s Graham’s and Calém, the last of which was originally owned by a Portuguese family. Facing these port houses on the otherside of the Douro, is the main city centre of Porto. A city built on a winding street, cobbled stairwells and steep hills.

Sights: Dom Luís I Bridge (the bridge is split between the high level walk way and metro-line, and underneath the lower-level road which you can also walk along – I recommend walking across the bridge on the top level, getting the cable car down to the port factories, then when you want to return to the otherside, hop on a boat that will take you to Praca da Ribeira – see ‘must visits’ below);  São Francisco church (the most prominent Gothic architecture you’ll find in Porto. Head inside and you’ll get blinded by the gold!); Palácio da Bolsa (the city’s former stock-exchange); Clérigos Tower (a Baroque church in the city centre).

Must visits: Have a drink on the water: whether you sit in one of the more touristic bars or just grab a couple of beers from a nearby mini mart, relax in the sun and watch the boats go by. It is just blissful! São Bento railway station (just pop inside when you’re walking by to see the 20,000 tiles that decorate the walls of the station. It’s really quite special); Mercado do Bolhão (a wonderfully traditional market, where you can buy food, port, Portuguese linens and souvenirs); Livraria Lello (a beautiful Baroque bookshop which is said to have inspired many writers including Britain’s own JK Rowling); Casa do Musica (contemporary music hall); Praça da Ribeira (stroll along the water, stop somewhere in the sun and have a drink); Majestic Café (an 1920s art nouveau café that is said to be a favoured haunt of artists and intellectuals). If you have time head to the Botanical Gardens (you can just hop on city bus no. 200) Oh, and take a boat ride along the Douro: http://www.portodouro.com/

Taberna Dos Mercadores My favourite place to have dinner in Porto. A tiny, traditional taverna with delicious food typical of the region and wines. Make sure you order the clams (and soak the bread in the juices until they’re almost disintegrate, then scoop it up), and the fish in salt. It’s always packed so book ahead if you can.

DeTerra Delicious vegetarian restaurant with a buffet of massive salads. Their vegan banoffee pie was to die for!

The Wine Box An awesome place to go for a quick drink or dinner. Be warned, their ‘small’ charcuterie board is enough for six people!

Zenith Awesome spot for brunch-y foods and cocktails. Get their early and grab a seat on the street. Order their port and tonic, goes with any dish!

Confeitaria do Bolhão Close to the Mercado do Bolhão, you’ll find this small café. Pop in to get the taste of their freshly baked goods.

DOP This restaurant is one by chef Rui Paula. The decor and general ambience of the place is really cool, and whilst the food was delicious, it was a little too fussy for me. I don’t like eating flavoured foam.

Restaurante Book A super cosy yet elegant restaurant & bar (bar only open in the evenings) set in a former library.

Casa Adao If you’re looking for a spot to eat whilst you’re in Gaia, either before or after your port tasting, avoid all of the brightly coloured tourist restaurants, and head straight to Casa Adao. It’s a small, traditional Portuguese menu with delicious fresh fish and cheap wine. The house red is delicious, but the house white is a vino verde (which is green wine traditional to Portugal), so if you’re after white, make sure you ask for it specifically. Their octopus salad is one of my favourite seafood Portuguese dishes.

Clérigos  A delicious looking tapas and wine bar with extended menu of pastas and fresh salads. Only open at lunch

Casa de Cha da Boa Nova Another restaurant by chef Rui Paula. I’m not sure I’d go because I wasn’t a huge fan of the food at DOP (see above), but the restaurant itself looks great.

Galeria de Paris is a street in Porto that’s full of bars with killer happy hour deals for as little as €2! Galeria de Paris is also the name of one of the bar/restaurants which is owned by a Portuguese collector. Go in, just to check out what he’s got!

Miradouro Ignez Drinks with a view

The Yeatman Stunning five-star hotel in Gaia with a michelin-starred restaurant. If you don’t go for food, pop in and have a drink and look across the Douro river at Porto as the sun goes down

Porto Tonico For your port fix

Hotel Infante Sagres Not much to look at from the outside, the Infante Sagres is right in the centre of the city, and even better, in the bar district. Don’t worry, you can’t hear the clinking of glasses and nattering of youths from your bedroom window, thanks to the double glazing. The hotel is wonderfully old-school, with porters with white gloves opening the lift doors, and a beautiful courtyard to have breakfast in the blazing sun.

The Yeatman Real fancy. Definitely pop in for a drink