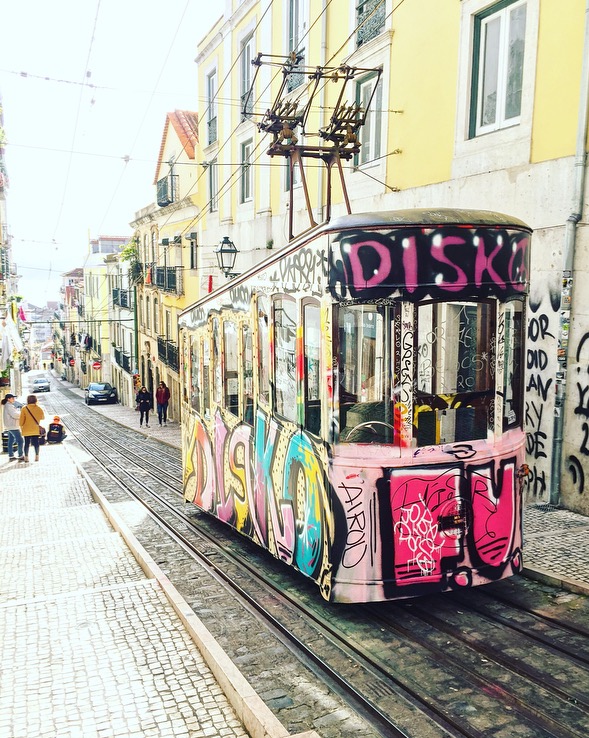 Lisbon is my absolute favourite city in Europe. You could say that I’m slightly biased because I’ve had a family home in the South of Portugal where I’ve spent most of my holidays growing up, so it automatically puts Portugal in a very special place in my heart. But I don’t think I am being biased. Lisbon is so enchanting, I have no doubt that if and when you visit it, you’ll feel exactly the same way.

Over the last ten years, Lisbon has been hailed the ‘San Fransisco of Europe’, (probably because it has a similar bridge), or where ‘Berlin meets Barcelona’. However you want to describe it, Lisbon is awesome, and only recently has its cool factor shot through the roof. The city has an incredibly colourful energy, which is matched by the facade of the buildings, from the paint jobs and mosaic tiles to the ornate detail around a random door or window frame. And alongside all this, the food scene is outstanding. You have a mixture of the more traditional, Tarverna-style restaurants, which serve traditional meals and ridiculously cheap prices, as well as the more modern, fusion, michelin-starred eats by some of the country’s hottest rising chefs.

Portugal is, quite literally, my home away from home, and Lisbon is it’s beating heart. And my love for the city is so strong I’ve decided to get married there, which, honestly, is the perfect excuse to keep going back over and over and over again!

Viewpoints: Miradouro de Sao Pedro de Alcantara, Castelo do Sao Jorge to visit the beautiful castle or just a walk through parts of the old town and a killer view over the city; Take tram 28 circuit to see both the old and new parts of Lisbon

Places to go: LX Factory is a must! It’s super hipster, East London meets Camden, with awesome food spots and an excellent outdoor market on Sundays; Feira de la Ladra Lisbon’s flea market open on Saturdays; Conserveria de Lisboa Established in the 1930’s, Conservervia  de Lisboa were the leaders in the canned food business. Go get yourself some mackerel fillets or spiced sardines, straight out the can. Praça do Comércio a massive, stunning square along the river with cafés running alongside. A tourist spot, but definitely worth a visit. If you’re in the old town at sunset, make sure you head to Calcada do Duque which is a street running from Barrio Alto to Rossio that is made up of hundreds of steps (don’t worry, it’s manageable!) with beautiful views of the city below through the streets and lots of little local restaurants. Once you hit the bottom, pop into Ginginha do Carmo and order some delicious cherry-flavoured liquor. Head to the Pink Street, a strip of bars and clubs in the heart of the city.

Districts: Alfama is the oldest district of Lisbon, spreading on a slope between the São Jorge Castle and the Tejo river; Belém to get the original Pastéis de Nata, and see where the Portuguese explorers departed Lisbon to find other parts of the world; Bario Alto & Chiado are close to one another and both areas are great for drinks, food and shopping; Lapa formerly the most chic area of Lisbon, now known as Embassy land. Madonna just bought a place there!

If you’re in Lisbon for a few days, I would highly recommend renting a car or better still, hoping on a train to Cascais and/or Sintra. They are nearby, absolutely stunning and doable in a day (each).

Pastel de Nata: This is the traditional Portuguese custard, egg pastry which is absolutely delicious. They are so delicious in fact, I ate three in less than a minute when I have an egg intolerance and suffered stomach cramps the rest of the afternoon. But it was worth it. They are sold in every bakery shop in Lisbon (which there are a lot of!) and given my intolerance to egg, my fiancé has kindly agreed so sample all of them so you know where to get the best ones.

So far, in order of preference:

Brunch & Brinner: I don’t usually separate brunch places from the general ‘EAT’ section of my travel pages, but on my last trip to Lisbon (March 2018) I was pleasantly surprised to see how many new brunch and brinner (yep, that’s a thing now) have opened. In keeping with Lisbon’s overall vibe, they are are cool, relaxed and beautifully decorated. Here’s my best of the b(r)unch:

Café Boavida This is definitely my favourite! Order the sardine starter. They also do insanely delicious and cheap meal deals where you can get granola, avo on toast and fruit all for €9. And they are vegan friendly

Fauna and Forna All day brunch and brinner!

Dear Breakfast A brand new (opened a week ago, on 18 March 2018) breakfast, café joint. Expect to queue outside whilst you wait for a table, and also expect to wait for your food. They are still working out how to serve in a timely fashion. The food is OK not amazing. The decor steals the show.

Rio Maravilha Delicious and trendy spot with great views in the LX Factory. You’ll need to book ahead.

Bica do Sapato Super trendy dinner spot along the water. The menu is extensive with seafood as well as sushi. The more traditional seafood dishes were delicious (much better than then sushi). But the service was incredibly slow, so if you’re in a rush, or would like to eat before midnight, I wouldn’t recommend it. But it’s right next to LUX nightclub, so definitely pop in for a pre-dance drink.

Tapisco Awesome Spanish-style tapas joint from the same chef of michelin-starred Alma, Henrique Sá Pessoa (see Alma review below). Even their simple jamon on toast with tomatoes is outstanding. Make sure you order the chips, jamon and egg dish too!

Palacio do Chiado Chiado is a pretty cool part of Lisbon with lots of restaurants and bars. Palacio Chiado is a former department store that burnt down and has been turned into a number of restaurants under one roof. Upon entry they give you a charge card where you can put all your food and drink onto and then pay at the end. It’s a really beautiful building inside and the decor and food matches perfectly. I had lunch at the wine and tapas bar on the first floor. When you ask for more bread, they give you more cheese to go with it. It’s awesome.

Alma Without a doubt, some of the most delicious Michelin-starred food around. I’m not one for jus and foams and all the other theatrics, but chef Henrique Sá Pessoa keeps it to a minimum and makes taste outstanding. Order the fois gras to start, just WOW.

Taberna da Rua Das-Flores Delicious traditional dishes at really good rates (mains are between €7-12 euros). It’s a tiny spot so limited seats – I arrived when it opened at midday and by 12:#0 they were turning people away because their waitlist was full. Also, it’s cash only.

A Cevicheria Ridiculously delicious ceviche and other under the sea goodness. They don’t take reservations and make sure you are there bang on 12:30 when the doors open as there will likely already be a queue forming. Try and get a seat at the bar to watch the chefs work their magic. Oh, and all of them (chefs, waiters, bartenders, maitre’d’s are also ridiculously delicious looking!) 😉

Time Out Market / Mercado Da Ribeira This outstanding market has something for everyone. It’s the perfect place to go on your first night in Lisbon if you’ve taken an evening flight. They have a lot of choice, it’s all delicious, and they stay open till 2am on weeknights (4am on weekends). Oh, and they have their own Pastel de Nata (traditional Portuguese custard tart) factory in the market. ‘Nuff said.

Cervejaria Ramiro Family-run seafood eatery. It opens at 12:30 and there’s already a queue when you get there by quarter to one. The queue moves quick, despite the small restaurant. The waiters don’t speak a word of English, which I love. Just make sure you order the plate of jamon and their prawns in garlic sauce. It’s to die for!

Tágide Portuguese cuisine with a view of the city. Order the octopus.

Tease It’s all about the cupcakes

The Decadente The hints in the name. A rather decadent setting as it’s in the Swiss ambassador’s former residence.

O Talho A fancy butcher-style restaurant, for all the jamon in the world

Solar dos Presuntos High-end Portuguese cuisine, rich with fish & seafood but with meat too, in a family-style setting

Bubba Bar (not to be mistaken for Budda Bar)

Arco de Velha Really cute and eclectic bar which looks more like a coffee shop. Serves nice bites and you can sit in the window and watch the world go by (you will literally sit in the window)

Copenhagen Coffee Lab Chase your cupcake down with a Copes coffee just opposite Tease (the cupcake place above). They were the only place in Lisbon I found that had almond milk. Hallelujah!

The Mill Café (with almond milk!) by day. Wine bar by night.

Fabrica Barn yard meets hipster roaster meets vintage style in this quirky coffee shop. No WiFi. Why (fi), you say? Because they encourage people to talk to one another.

The Good, The Bad and The Ugly Live music venue

Double9 In the 9 Mercy Hotel

Rio Maravilha in the LX FACTORY

Park Bar Super cool and fun bar on top of a parking lot. Find the stairwell and climb

Terrace BA at the Barrio Alto Hotel. The view was a little lost with all the cranes in the way, but a cute spot for some piece and quiet away from the city 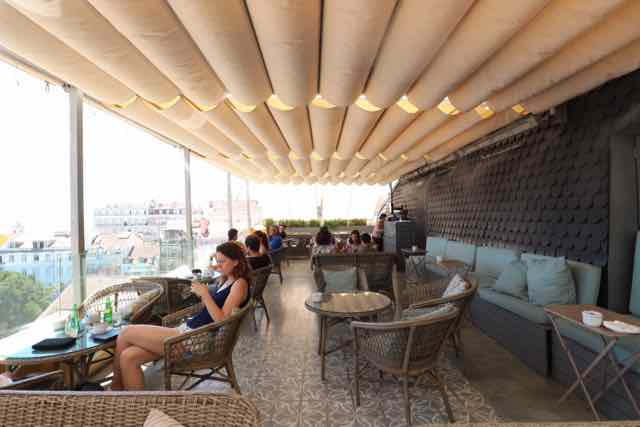 Pestana Palace Lisboa Pestana Palace is a little further out of the city centre (approx €5 uber away) and is one of two 5-star hotels in Lisbon with a pool. The Palace itself is beautiful, as are the gardens. And the breakfast that’s included in the room is a spread fit for a queen, like the ones who used to live there. 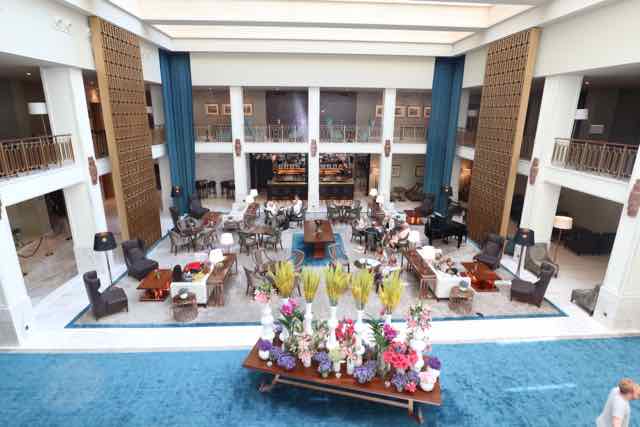 Memmo Alfama Hotel Cozy and clean hotel with very friendly staff. It’s situated at the end of a cobblestone street so not very accessible but great if you like to walk. Amazing small pool looking out over Alfama. Request a floor on the 3 or 4 floor though for views.

The Independente It’s a boho hostel with a fun vibe, similar to Soho House or the Ace Hotel in New York. Very chilled out & unpretentious. They have a good restaurant in the hotel called Restaurante Insolito.

9 Hotel Mercy Looks cool, despite the website and centrally located

Four Season Far too fancy pants for little ‘ol me

I visited Lisbon in February 2017

Visited and updated in March 2017

Visited and updated in July 2017

Visited and updated in November 2017

Visited and updated in March 2018