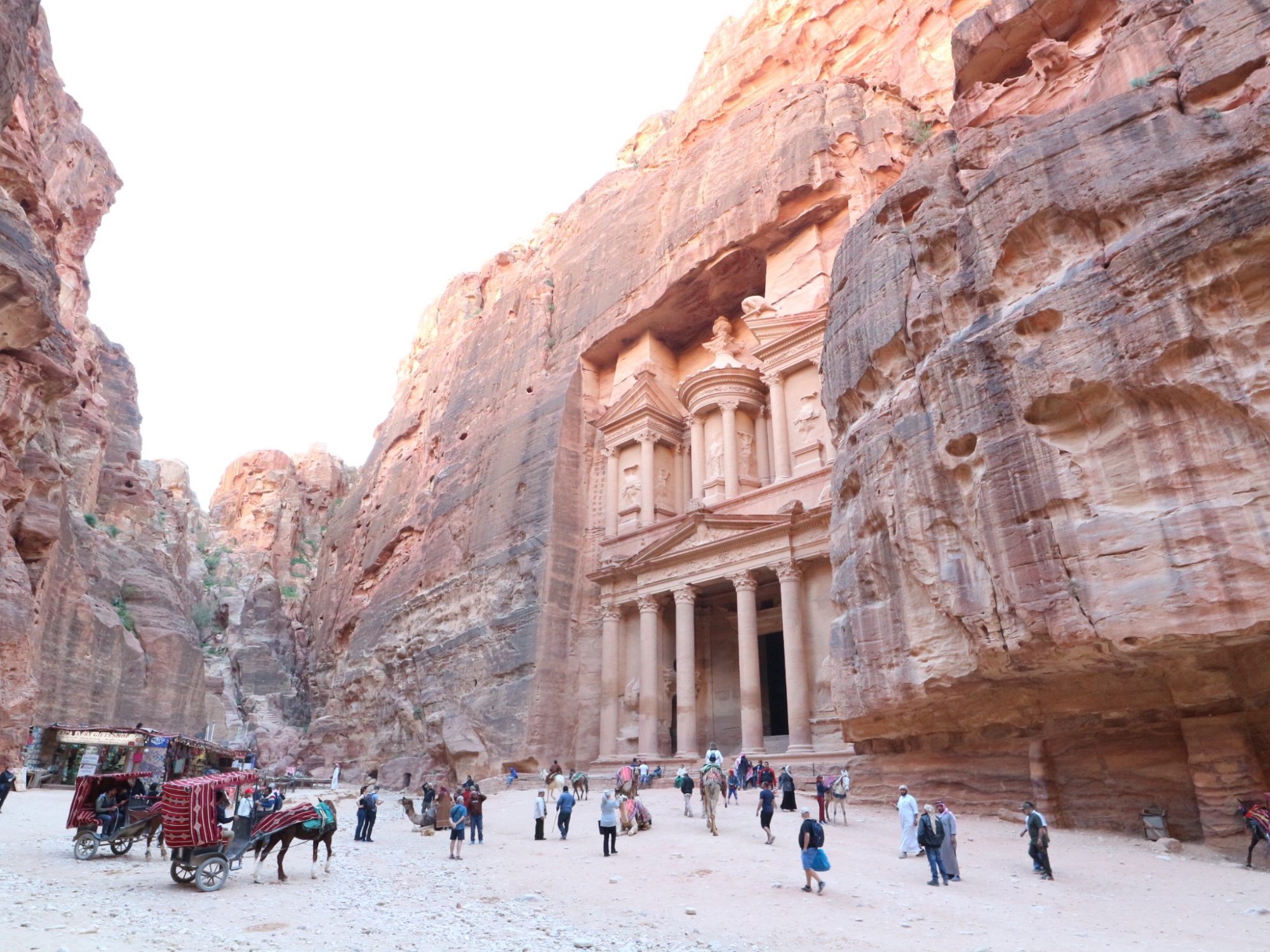 Now I have to be honest, my perception of Jordan before visiting was way off. Call it ignorance on my part, but I thought Jordan was similar to Dubai, in that it had a lot of money. Jordan is expensive (close to London prices), so I thought that things would be brand new and shiny. They ain’t. So on arrival, I had to quickly re-adjust my levels of expectation.

Jordan is without a doubt one of the most beautiful countries I’ve visited. Its mountainous and oceanic landscapes(the Dead Sea is pretty damn big and beautiful), the endless deserts and, of course, Petra, are quite spectacular. It’s a small country and one that you can see most things in a few days. I went to with a girlfriend; we hired a car and travelled around for four days. Driving across Jordan is totally do-able. The roads are sometimes bumpy but otherwise open and empty, with the odd camel, donkey or goat in the lay-by.

On landing in Amman, the capital of Jordan, we rented a car (Kia Sportage, which was awesome on the somewhat rough roads and long highways) and drove straight to our first hotel close to the Dead Sea, the Ma’In Hot Springs Hotel & Spa. From reading and photos online, and even the leaflets in the hotel room, the hotel claimed it had five restaurants, two pools and an inclusive spa. It didn’t. It had one restaurant and one pool (that was full of screaming, excitable kids). The spa was open to the public and even as a paying hotel guest, you had to pay extra to use the spa. The spa had two hot springs, which we were led to believe had water from the Dead Sea. Again, it did not. What the hotel did have going for it though, was it’s incredible setting, in the deep valleys close to the sea; and their breakfast and dinner buffet was some of the best food I had in Jordan.

If you want to go to the Dead Sea and actually step foot in it, I would recommend staying (and paying for the luxury) on the sea itself, and the likes of the Kempinski, Hilton or Movenpick which are all right on the salty water.

After a night close to (but not actually on the Dead Sea, sigh), we drove 3.5 hours to the world famous archaeological site in Jordan’s southwestern desert, Petra. The drive along the Dead Sea highway towards the desert was absolutely breathtaking, and it’s pretty cool knowing that you’re at the lowest point on Earth. Petra dates back to around 300 BC, was the capital of the Nabatean Kingdom, and is nicknamed the Rose City due to the stone’s pinky hues.

On arrival into Petra village, we checked into our hotel, Old Village Hotel, which is about a 2km (15 min) drive from the entrance of the ancient city. The hotel was nearly renovated and gorgeous. We were upgraded to a junior suite which was pretty big and the views from the dining room were stunning.

After checking in, we asked the receptionist if they organised tours of Petra, and he said that he did. He called a guy who met us at the hotel to start the tour. Once we got through the tourist gates at Petra’s visitor’s centre using our Jordan Pass (regular entry is 90 JOD / 90 GBP). Once we got through, however, instead of walking with the crowds to the entrance of the ancient city, our guide took us off a the main trail, across Bedouin farm land, up steep rock faces and across ‘bridges’ made from planks of wood, along what I now know is called the Al Madras trail. There are many different trails that you can do to access alternative and stunning view points of the city. Just make sure that you 1) know EXACTLY what you’re getting yourself into, and 2) you have a guide. Don’t dare to it alone. It was probably one of the most terrifying things I’ve done (one slip and you’d be lucky if you only broke something!) The views from the top were spectacular, but slightly marred by we thought we were going to die on the way there!!

Now I’m going to say something that is probably thought of by a lot of people, but said aloud by few: Petra is a tad over-rated.

My favourite parts of the city have to be walking through the Siq (the entrance pathway to the city) and the famous Treasury at it’s entrance. They are both massive, awe-inspiring and stunning. However, beyond that, I was disappointed. That said, I would definitely recommend heading there for a day and exploring; but you definitely don’t need three days (which is what everyone recommends).

WADI RUM
If there is one thing you do when you visit Jordan, it’s visit and sleep in the Wadi Rum desert. It is without question, one of the most spectacular places in the world I have ever seen. You feel like you’re on a different planet, so it’s no wonder it was the filming location for The Martian (the one when Matt Damon gets stranded on Mars).
Wadi Rum, or the Valley of the Moon as it’s also known as, is a valley cut into sandstone and granite rock. Someone told us that the rock is actually coral, as that part of the world was under the ocean, but I’m skeptical. Wadi Rum is best known for its connection with British officer T.E. Lawrence, who passed through the desert several times during the Arab Revolts in 1917-18.
If you’re driving to Wadi Rum and sleeping at one of their camps, make sure you leave your car in the village car park. Do not attempt to drive your 4×4 Kia Sportage on the sand (I thought 4×4 and four wheel drive where the same thing. They are not!) We stayed at the Wadi Rum Luxury Camp and I cannot recommend it enough. We had originally booked a tent, but when we arrived, were upgraded to a bubble tent, which was a luxury tent with transparent top to see the stars from your bed at night. It was absolutely stunning. During the day we did a 2 hour tour to see some of the most magnificent landscapes I’ve ever witnessed, and if you wanted to, you could have had part of the tour on camel-back. At night, the owners of the camp made a delicious dinner of chicken and rice, that they had cooked in an oven underground. There was a Bedouin tent after dinner which provided tea, shisha (or hookah), and henna (my fav!).

Amman is Jordan’s capital and is known as the land of seven hills, that now actually has an eigth and will no doubt soon have a ninth as the city keeps expanding. You can see the city in a day pretty much. Below are my recommendations.

Viewpoint: Citadel A well known historic site with ruins and great views of the city

Places: Rainbow Street is one of Amman’s most famous roads (mainly for tourists), with a bunch of bars and cafés; Petra Street Souk (or Betra Street as GoogleMaps might call it); Weibdeh is one of the city’s nicest areas with lots of interesting restaurants.

Sky Lounge We couldn’t actually find this place, but it’s supposed to be quite cool!

The Intercontinental Awesome hotel, large outdoor pool (closed at the off season), brilliant breakfast buffet and all you can drink happy hour

After a disappointing start to the trip (not getting into the Dead Sea, and the near-death experience climbing around Petra), Jordan turned out to be pretty spectacular. Other cities that we didn’t have time to see are Aqaba, which is a Jordanian port city on the Red Sea’s Gulf of Aqaba; and Jerash, a known for the ruins of the walled Greco-Roman settlement of Gerasa.

Would I visit Jordan again? My inner alien definitely wants another night in the desert.

I visited Jordan in March 2018