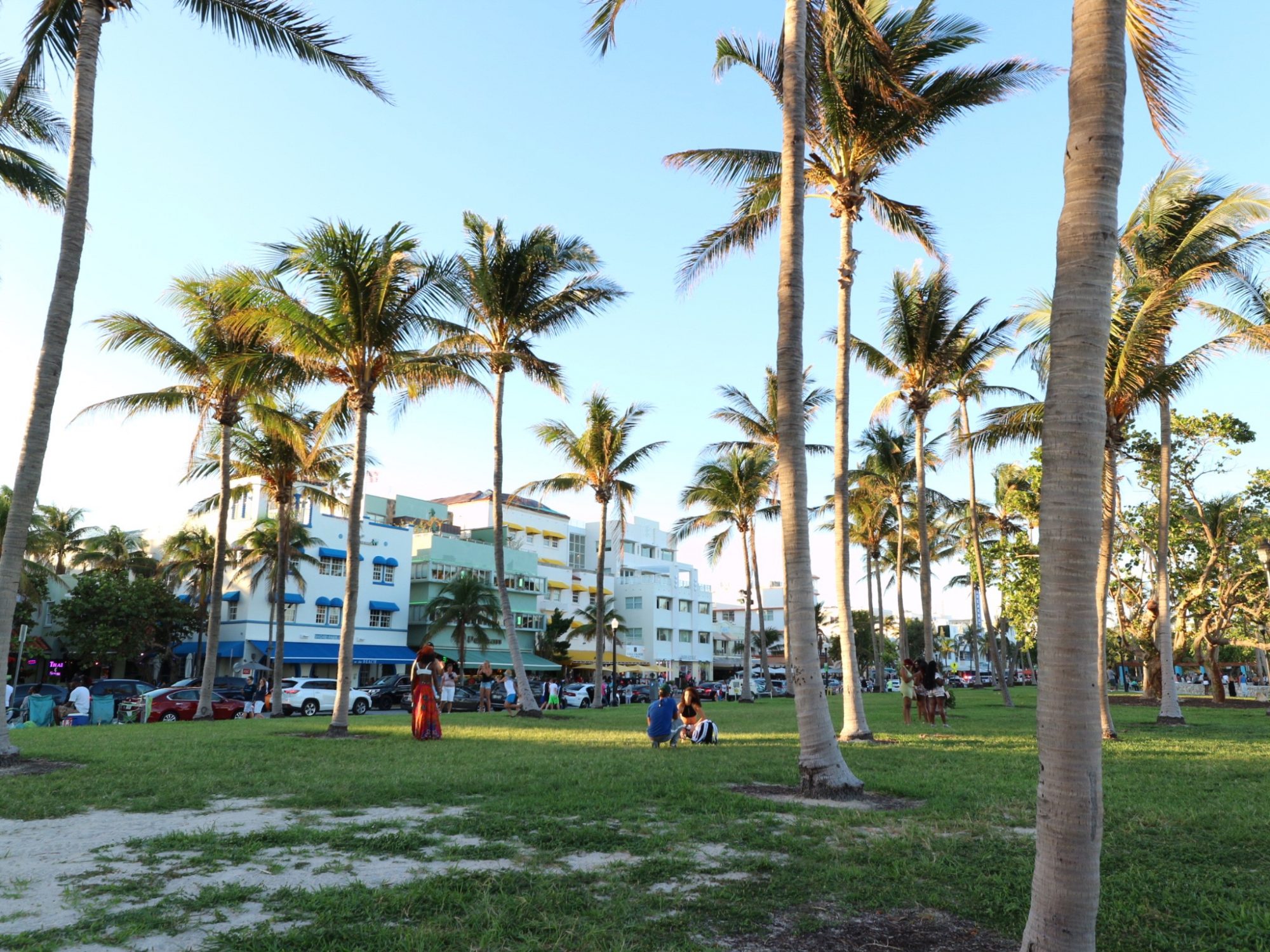 The first thing I did after landing and checking into my hotel, was head to Ocean Drive in South Beach (or SoBe). It was exactly how I imagined it: a strip of restaurants and bars with neon-lights, loud music, swarms of people (dressed in everything from jogging bottoms to barely-anything bikinis), and pitcher-sized cocktails. It was awesome! The best way to experience Ocean Drive is by walking on the path closest to the beach so that you can fully appreciate the old-school, art deco architecture, (and avoid the nuisance drunks and bar staff asking you to eat in their restaurant). The buildings are worn, discoloured and gorgeous (if art deco is your thing!). Check out the architectural tour below for exactly what to keep an eye out for.

The people in Miami are friendly, as per the typical American way. And they’re also big: big butts, biceps and general bulges! And they run on ‘Miami time’. I was there for work, and when they told me a meeting was at 8:30am, they really meant 10am…in some instances, 1pm! My Swiss-favoured time-keeping did not adjust well!

Architectural Tour: Take a short walk down Ocean Drive (make sure you head there after 6pm to see it become neon wonderland!), then up Collins Avenue which runs parallel, then along Washington Avenue. Aside from people-watching, there are plenty of wonderful buildings to look at. Make sure you check out: Edison Hotel, a yellow-and-blue property from the 1930s; the pink 1920s Locust Apartments, now housing the Fat Tuesday cocktail bar; and the pink, yellow and white Waldorf Towers complete with lookout windows. Turn right along 9th Street and right again along Collins Avenue past the remaining walls of Coral Rock House, built in 1916. Continue past the Essex House Hotel, built in 1938, and turn left along 13th Street. At the corner of Washington Avenue you’ll see a US Post Office occupying a circular building dating to 1937. Continue up Washington Avenue, past the Cameo Theatre, to Espanola Way, a pretty Spanish-styled street full of with cafés and galleries.

Museums: The Bass A museum of contemporary art; The Holocaust Memorial Not a museum but definitely worth a visit when you’re at Miami Beach; Wynwood Walls An outdoor museum showcasing large-scale works by some of the world’s best-known street artists

Areas: Wynwood Known for its brilliantly awesome murals, Wynwood is one of the city’s coolest districts. Stroll around absorbing all the art, pop into converted warehouses housing craft breweries and funky art galleries, and make sure you go to Wynwood Walls; Little Havana is Miami’s vibrant Cuban heart, with Latin American art galleries and busy restaurants; South Beach is where Miami’s magic happens. Full of nightspots and celebrity-chef eateries. Head to Ocean Drive for it’s art-deco architecture and people gazing.

Work Outs: Run along Muscle Beach, a two-mile beachside stretch and stop to do some pull ups with the locals; Barry’s Bootcamp for the usual tread/floor workout. Soul Cycle are also opening their third space in Miami.

Bodega Very cool joint with spectacular tacos. They have a speakeasy bar at the back with live music & DJs from 10pm

Dr Smood Really pricey but really delicious vegan eatery in the super cool neighbourhood of Wynwood. I worked around the corner and ate there almost every day. It was delicious (and thankfully I could expense it!)

Zak the Baker Deli Having started as an artisanal baker pedalling sourdough loaves at farmers’ markets, Zak now has a loyal following, with a line out the door of his kosher café at breakfast and lunch times

Yardbird For the best fried chicken of life

Ricky’s After tacos at Bodega, go for slider next door

27 Restaurant & Bar Tucked away in a two-story cottage at the rear of The Freehand Miami hotel and hostel where the popular Broken Shaker cocktail bar is also found. Their menu is delicious, modern Israeli food

Icebox Café The bright, airy dining room is chic, with whitewashed wooden accents and cushioned banquette seating. It also has a nice bar if you happen to be dining solo

News Café Grab a table outside and watch the wonderful world of South Beach go by. The café opened in 1988 and has since become the classic venue to chill out, read the papers and linger over coffee

Joe’s Stone Crab A classic a dining experience as it gets in South Beach. Their key lime pie is the best in Miami, so I’ve heard

Zuma The modern Japanese import from London inside the EPIC Hotel

The Bazaar by José Andrés Avant-garde Spanish chef José Andrés has made his mark in Miami at the sexy SLS South Beach hotel with The Bazaar, offering a modern take on traditional Spanish tapas

Eating House Favourites on the playful, modern and constantly changing menu include: pork belly with calabaza, banana mole and smoked jalapenos; organic chicken with “foie”-ffles (waffles prepared with foie gras); and sea scallops with local carrots in a maple-miso sauce

Dolce Italian A chic, understated dining room with the delicacy of the freshly-made pastas

Monty’s A Miami institution. It’s a bar with a bad restaurant. It’s designed like a Tiki Hut which is quite typical of the style in the Keys

The Standard Hotel Sip drinks and soak in the view

Story A ridiculous line up of DJs

Baoli Restaurant and club in a garden setting

Freehand The coolest hostel in Miami

I visited Miami in November 2017