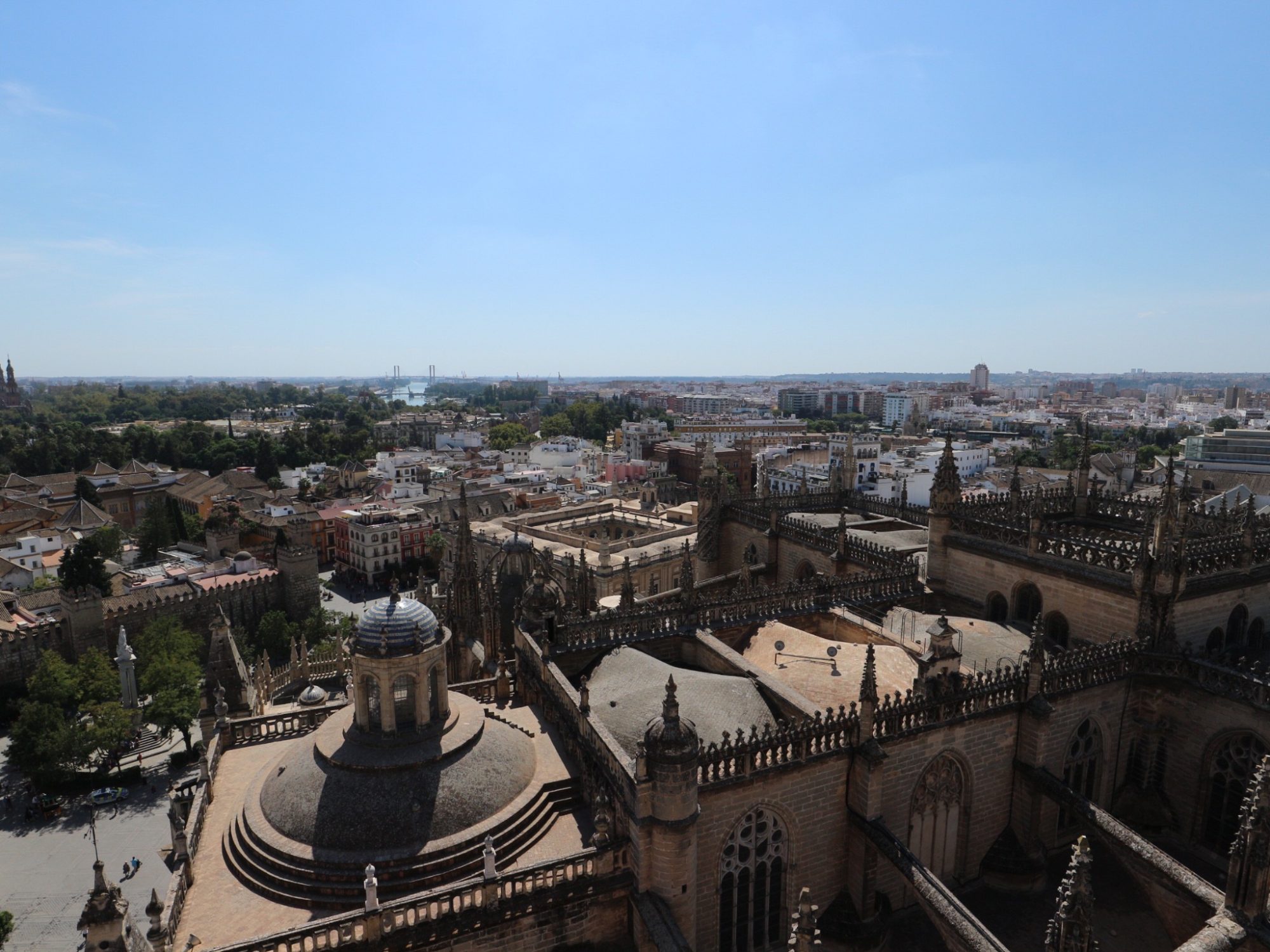 Seville is stunning! I totally fell in love with the city’s architecture, history, music, food, people and nature. It’s known as the city of the orange trees, but depending on the time of you year you go you may mistake them for limes! Seville’s city is covered with vast patches of green thanks to its beautiful parks and the Palace gardens. The Canal de Alfonso XIII running through the city reflects the green of the trees and the long, tall palms surrounding it.

Seville’s streets are known to be long and narrow. When you’re walking around keep your eyes out for the beautiful churches that are on almost every corner. They’re completely unassuming from the outside and stunning on the inside. The streets are exactly what I would expect old-school Espagne to be like: full of tavernas, bodegas and charm. It seems a little silly having a ‘drink’ section for this city because you can get a glass of wine everywhere. And when it comes to ordering, you just tell the waiter your choice of colour, and they pick and pour.

A lot of restaurants in Seville have a choice of either their ‘restaurant’ or their ‘tapas bar’. It obviously depends on what you want to eat, but I would recommend choosing the tapas side every time. Dishes are usually around €2-4 euros each, and Sevillian tapas is much larger than the likes of Barcelona or Madrid, so you can eat a lot for a little. I also noticed that Sevillian’s go to bed much earlier than other Spanish cities with restaurants closing at midnight (or at least the ones in the Old Town did).

Seville, you blew me away. Your beauty, elegance and charm is tough to beat. That’s probably why you are my favourite city in Spain.

Museum: Museo de Bellas Artes is Seville’s fine arts museum and is the second most important Spanish art museum after the Prado Museum in Madrid; Centro Andaluz de Arte Contemporaneo is the Andalucían centre for contemporary art and situated in an extraordinarily beautiful and serene former monastery.

Places: Walk up The Metropol Parasol at Plaza de la Encarnacion to get great views of the city. I went at night and it was magical; Walk through the stunning Maria Luisa Parks to The Plaza de España which is stunning with it’s footbridges, canals and tiled alcoves which represent each of Spain’s provinces. You must go to Alcázar, the city’s royal palace where the royal family still stay at to this day when they visit Seville. It is breathtaking. The queues can be really long, so make sure you get there early and leave time to get lost in the large gardens after you’ve walked through the palace itself. Get lost in the neighbourhood of Santa Cruz, home to the Jewish quarter and just behind the palace. Once you’re in that area make sure you pop into Hospital of the Venerables which was the former priests residence. So peaceful and quiet compared to the noisy tourist groups outside (which there are a lot of, by the way!) The city’s Cathedral, built in the 12th century and is one of the last Gothic cathedrals to be built in Spain. Again, the lines can be long but it’s worth the wait. Once you’re in there, make sure to climb the Giralda bell tower for incredible views. Definitely walk around the Cathedral at night to see it lit up. It’s really quite spectacular. Walk across the river to the San Jorge Castle (which is now a museum), and have a drink on your way back on the waterfront in the early evening. Pop your head into Seville University to see the awesome surroundings the kids these days are studying in. Get lost in the shopping streets around Calle Seirpes and all of the smaller, canopy-covered pedestrian streets running off it.

Bullfighting: even though I’ve seen it once and will probably never go again, the Real Maestranza Plaza de Toros is the world’s oldest bullring has occupied its spectacular site on the banks of Canal de Alfonso XIII since the late 18th century

Flamenco dancing: originated in Andalucía and El Arenal is a popular flamenco venue in Seville

Eslava This was on everyone’s list, and for good reason. This is a hugely popular spot so make sure you get there early. There’s a tapas bar and restaurant (eat at the tapas bar). Make sure you order the ‘award-winning’ cuttlefish cigar. Mind-blowing!

La Fresquita Awesome tapas taverna. It’s tiny with very few tables and chairs outside so it’s a stand and munch situation. Order the meat bashed in salt. Think it’s number one on the menu

Bodega Santa Cruz Wildly popular tapas and booze joint. Less than 5 euros for beer, wine and jamon. Done. In fact, the road that Bodega Santa Cruz is on is full of charming looking restaurants, so take you’re pick. They can be full of tourists during the day, but when we were there at night it was mainly only Spanish speakers, which I take to be a sign of good tapas!

El Rinconchillo Seville’s most historic taverna dating back to 1670. Really traditional and delicious. The waiters tell you what they recommend and you follow their lead. Make sure you order the spinach and chickpea tapas which is famous to Sevilla.

Bolas Delicious ice-creams whilst you’re strolling around the shops

Mercado Lonja del Barranco Originally built as a 19th-century market, now a popular, self-service food hall with riverside seating. They have a stand that sells a range of octopus dishes. ‘Nuff said

Bodeguita Antonio Romero These guys are famous in Seville for their Piripi (which is a small baguette sandwich with bacon and aioli) I’m not a huge fan or sandwiches, especially baguette ones, but these are good. They also serve Pringa which is another sandwich with meat. This was my favourite. Definitely go when you’re craving carbs (aka on a hangover)

Ena Catalan chef Carles Abellan brings his playful, post-modern cooking familiar from Comerç 24 and Tapas 24 in Barcelona. Make sure to book ahead for a table on the terrace.

Abades Triana A smart, contemporary restaurant with a glass façade above the lazy waters of Canal de Alfonso XIII

Ovejas Negras Tapas joint with industrial-vintage interiors. Also one of the few good places open on a Monday night

Yebra Rough on the outside, smart on the inside. Serves some of the best traditional tapas

Contenedor Started as a weekly pop-up, and is now one of the city’s buzziest restaurants, with a focus on slow food

La Brunilda A constantly changing menu with a long queue

Mamarracha Tapas bar in the heart of the tourist district 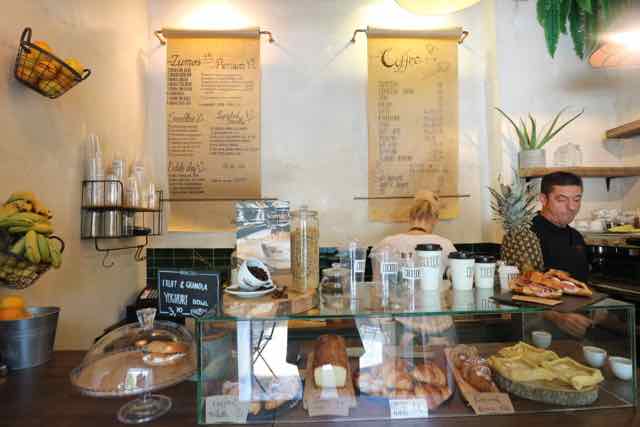 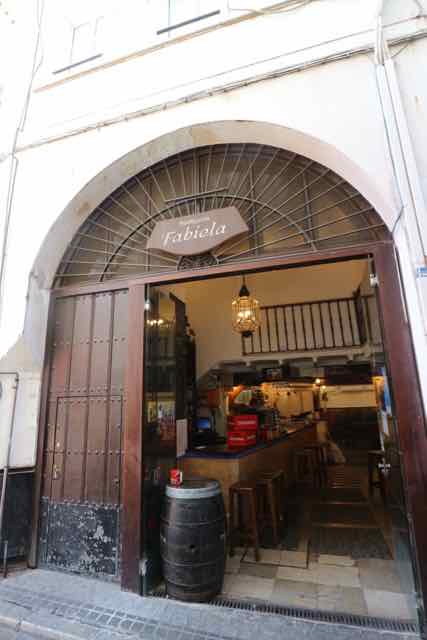 Hotel Alfonso XIII You must go here to look around. It’s a stunning hotel. If you have time, stay for a drink. Their Bloody Mary’s are delicious

Make sure you stay somewhere close or in the old town. It’s much more charming than other parts of the city and is where you’ll want to be when you wake up and go to sleep!

Hotel Fernando III Great location and massive! So much bigger on the inside than expected. Has a rooftop pool (which I didn’t go to because it was always packed). My only complaint is that the walls are so thin I kept being woken up in the morning by other guests chatting as they walked by my room in the corridor. I would probably stay elsewhere on my next visit.

Hotel Alfonso XIII The well-known, stunning hotel next to the university. It’s really pricey but probably worth it. Definitely go and have a drink there anyway

I visited Seville in September 2017