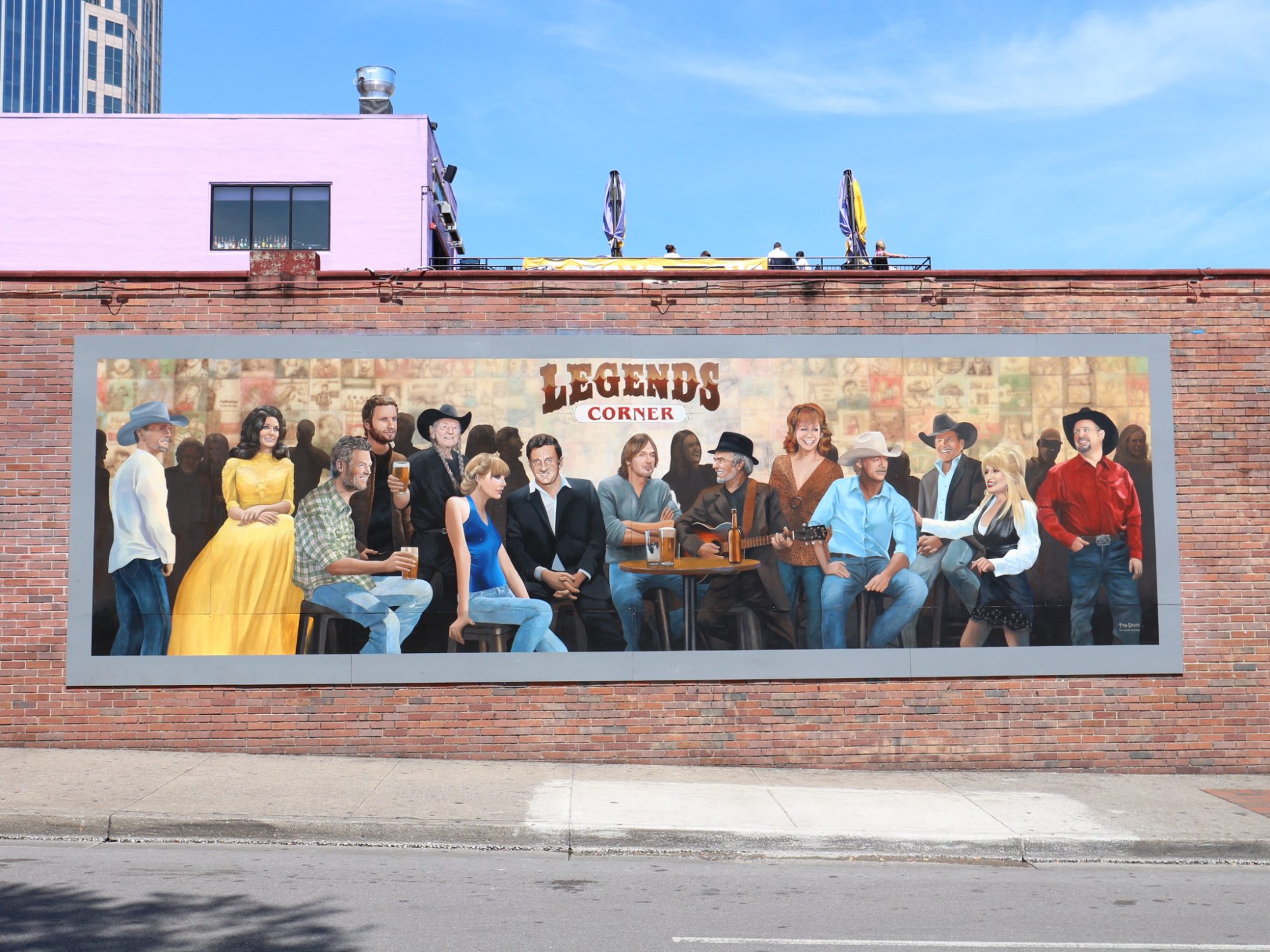 Nashville: the home of cowboy boots and honky tonks. Given it’s musical history, Nashville can’t be anything but cool. The music has infiltrated the city, quite literally, the public bike locks are in the shape of treble clefs, and the city is up and coming, again in the literal sense, with a cranes building a new sky-scrapers on every street block. Nashville can’t help but pull people in who want to have a good time, eat delicious food and listen to intensely intoxicating music, ranging from country, to rock to pop (kinda). The musical talent there is mind-blowing, and every guy who plays an instrument is hot. Even when they’re not.

Museum: Definitely head to The Frist Center for the Visual Arts if you have time. They usually have a fantastic exhibition on; The Country Music Hall of Fame and Museum is a must given you’re in Nashville and country music is its beating heart. Most of the museum was slightly lost on me, but it’s a cool place to go get the history before heading to Broadway to listen to the music. There’s also a Musicians Hall of Fame and Museum if you’re really into it, but I think the Country Museum is all you need. If you’re a Cash woman like me, then make sure you head to The Johnny Cash Museum, which displays pictures & memorabilia from his life. Further out of town is Cheekwood Museum and Botanical Gardens – I didn’t get to it but I’ve heard it’s a must! The Tennessee State Museum depicts the history of the state of Tennessee, and a slightly more left-field museum is the Parthenon, which is a full-scale replica of the Athenian Parthenon that houses American art. There’s also Tennessee Performing Arts Center and the State Capitol, which technically aren’t museums but worth a look (from the outside, at least!)

Sights: There are several neighbourhoods in Nashville that are worth seeing. Definitely stroll down Lower Board (aka Lower Broadway), which is the beating heart of the city. That’s where all the honky honks are…and COWBOY BOOTS! The Gulch area is on the fringe of downtown Nashville, and although it has a couple of cute eating spots (and one of my favourite work outs, Barry’s Bootcamp), it really links downtown Nashville to 12 South Avenue and the 12 South area. Definitely take time to walk down 12 South Av (or uber as the walk is not pretty and longer than you think). 12 South is now one of the hottest area in Nashville, full of restaurants, beer gardens and juice bars. 12 South used to be one of the most depressed areas in Nashville, with drive by shoot offs and drug crime, so much so that passersby wouldn’t even stop at the red lights for fear of being highjacked. But revival came as soon as Dolly Parton opened her music studio there and everyone wanted to be next to the action. Germantown is one of the oldest areas in Nashville, notable for it’s brick sidewalks, and has some of the best restaurants in the city; and Nashville’s Farmer’s Market is located nearby. East Nashville is now hipster-ville and has a few great restaurants, but don’t go to hang around as there’s not a whole lot to see. Printer’s Alley was a famous alley back in the day, known for it’s honky tonks – now it’s a tourist photo spot, but I went and there was really not much to see. Go to 2nd Avenue as there are a few boot shops and more bars on a cute street round the corner from Broadway. Check out The Ryman Auditorium which was the original grand opera house that now hosts concerts. Pop by Manuel’s to check out the famous clothes designer who’s responsible for so many iconic music memorabilia, like the Rolling Stone’s big lips. Music Row is actually a pretty cool area of Nashville, but it’s basically a bunch of houses that are all now recording studios. You can see people walking around and getting out of their cars with their double basses and guitars on their back. It’s pretty neat, and it’s also close to 21st Avenue South which has a couple of cute boutique shops.  If you have time to go further out of town, check out Opryland Hotel, which is a massive Venice-style convention center and hotel. You can actually ride a gondola through it! If you wanted to check out a plantation whilst you’re in Nashville, I was recommended the Belle Meade plantation. And if you’re in Nashville for a few days, take a hike around Radnor Lake national park. There are also a load of cool murals around Nashville, so keep your eyes out!

Honky Tonks: Honky tonk = a US term typically describing a cheap bar with live music). I actually found that I preferred the honky tonks during the day when they were less busy with less gropey guys! Tootsies Orchard Lounge andRobert’s Western World are arguably the two most famous honky tonks in town, but honestly, just walk around, find one with good ambiance and music that you like, take a seat, order a beer or shot of bourbon and enjoy. The BlueBird Cafe is another Nashville staple for country music, but I’ve heard the rules are much stricter there (i.e. no talking during performances), so if you’d rather relax and chat like me, then the Honky Tonks on Lower Broad are for you. Santa’s Pub is a cool dive bar in a trailer, where Mumford and Sons have been known to just show up and play. The Station Inn, more of a club than a honky tonk, is a stellar night out, apparently! I would also check to see if anything is on at Ascend Amphitheatre, which is a new outdoor concert venue.

Pinewood Social Located in an old trolley factory, this place offers a bit of everything from food and coffee to bowling and swimming. Go for the cheeseburger, short rib and best hangover cures

Lockland Table Delicious bistro-style food in a rustic setting with outdoor seating in East Nashville. Pizzas are also big on the menu. I had the lamb shank which was delicious and the chocolate ice cream dessert bomb was mind-blowing!

Biscuit Love Aside from falling in love with it because of its name, Biscuit Love is a bright and spacious breakfast/lunch spot. The queue is always rammed, and don’t think for a second that ‘biscuit’ in the US is anything like a British digestive

Jeni’s Splendid Ice-cream Possibly my favourite ice-cream brand in the US. Make sure you get the brown butter almond brittle. Trust me.

Hattie B’s Hot chicken is all the rage in Nashville. Hot means spicy and, in this case, deep fried. It’s a Nashville staple meal.

Butcher and Bee The sequel to the Charleston original. If it’s anything like it’s original, it’s a must!

Husk Another follow on from Charleston, Husk is billed as ‘a shrine to Southern vegetables’

Prince’s Hot Chicken Shack Quite far out of town but their ‘medium’ spiced fried chicken is too hot for most to handle. Yikes!

Bolton’s Go for hot chicken. The mild will blow your socks off.

The Catbird Seat – Sadly this was closed when I was in Nashville, but my god it looks good. Please go for me!

Crema Artisanal coffee house. Grab a coffee and sit outside on the patio with views of the Cumberland River.

The Patterson House Small speakeasy with killer cocktails. It’s not signposted so you may miss it. Order the bacon old fashioned.

Treehouse Full bar with an old children’s tree house. What’s not to love?

Steadfast For a great cup of coffee