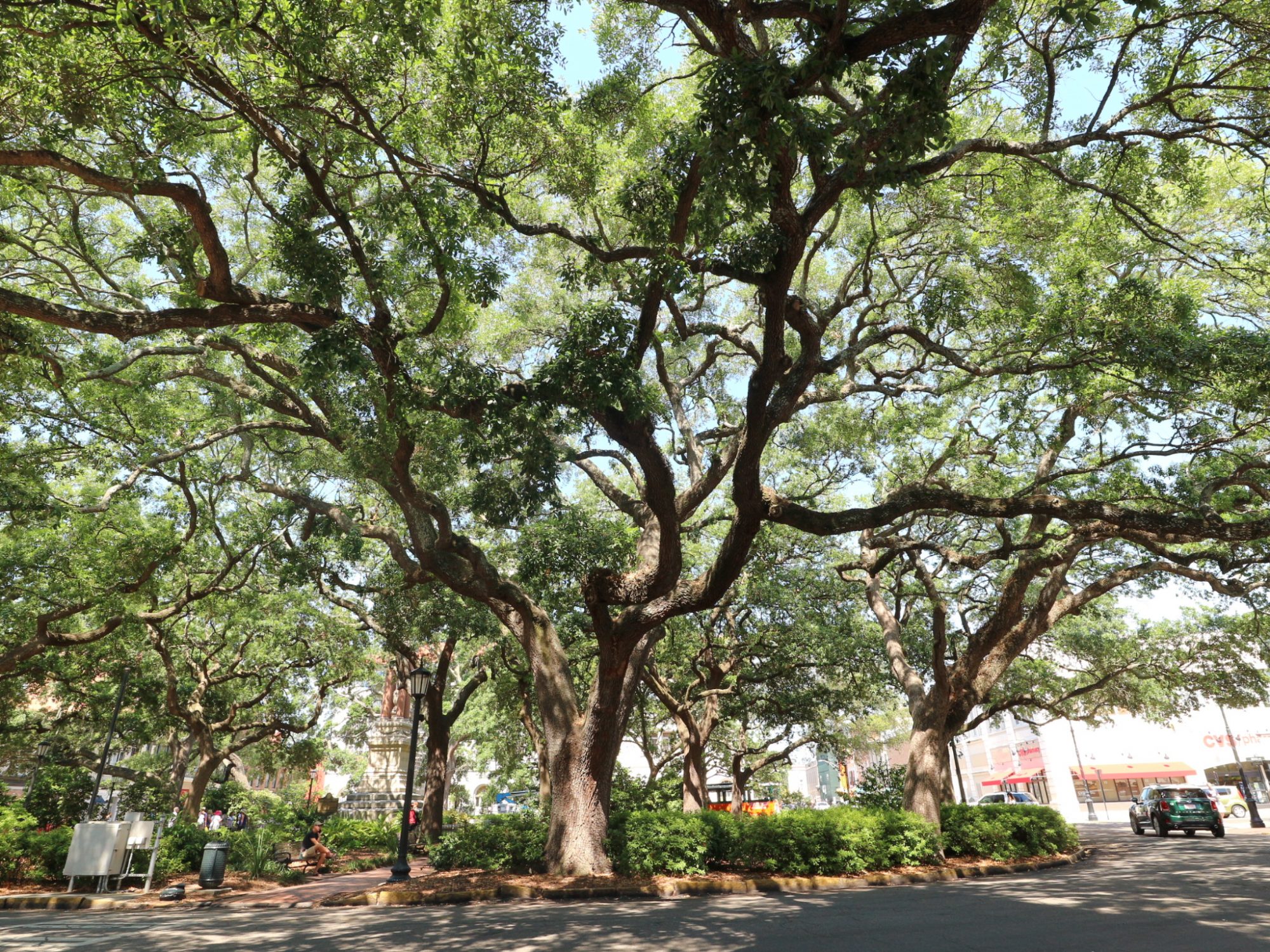 Savannah is a really special place. It’s blended architecture shows examples of Federal, Victorian, Regency, Greek and Gothic Revival, against a backdrop of beautifully creepy, gargantuan, twenty-year-old oak trees with hanging Spanish moss; its haunted stories makes it feel as though it’s an ancient city (which, for the US, it is).

This old-y world-y side of the city clashes neatly with the more modern, vibrant and creative kids of SCAD (Savannah College of Art and Design), which pulls in national and international students to study the most awesome courses from art history to theme-park design. Savannah also adopts the ‘to-go cup’ culture – which means that if you find yourself having ordered a round of drinks at the bar but you realise that you have imminent dinner reservations, you can take the drinks you’ve just ordered out into the street to finish them whilst you walk – provided they’re in a ‘to-go cup’ (and you’re between River St and Broughton St).

I feel in love with this secret garden city. And I think you will, too.

Museums: There is so much art (and architecture) in Savannah. Make sure you visit SCAD’s Museum of Art, which showcases really cool art by some of the students and it’s alumni, as well as local artists to get students inspired. SCAD owns a number of museums throughout the city, so make sure you visit one, if not that one. Jepson Center of the Arts has an impressive atrium entrance as well as exhibitions.

Things to do: Savannah is built across 24 squares (as in park squares), which are all similar to each other and stunning. You don’t have to visit them all, but the best way to get to most of them is by walking down Bull Street. Start at the water and walk down Bull Street to Forsyth Park, a beautiful historic park, popular with many wedding pictures! Make sure to take special note at Chippewa Square, which is where Forrest Gump famously sat and told his story in the smash hit movie. There are loads of tours in Savannah, so make sure you do one as it’s the best way to learn about its history. I would highly recommend the awesome 90-minute architectural walking tour by ArchitecturalSavannah led by Jonathan Stalcup, a super charming and knowledgable SCAD alumnus who mastered in architecture. Walk into the Cathedral of St John the Baptist, a stunning churh in the city centre. Walk around City Market, which is a small but cute parade of shops with live music in the streets. Head to Broughton Street to do your shopping – they have everything from H&M to Victoria’s Secret, as most of the less known, boutique stores have been priced out of the area. River Street is one of the most touristic spots as it’s right on the water, but it’s definitely worth a visit. I would recommend heading there just before sunset (it’s a little less charming in complete daylight) – so grab a drink (to go) and watch the sun set behind the bridge. Hopefully you’ll be lucky enough to see a cargo ship coming into the port – they are MASSIVE and quite frankly quite scary. Be careful when you’re heading to River Street, as the steps heading down tot he water are historic steps also known as the ‘Stair Stones of Death’ as they are dangerously steep.Slightly further out of downtown Savannah are both Bonadventure Cemetery (one of the world’s most beautiful burial sites) and Wormsloe Park with it’s beautiful willowy trees. If you have time, make sure you visit Tybee Island for a day at the beach, and you’ll get to see the old civil war fort, Fort Pulaski National Monument,

Where to work out: Slightly further out in midtown, HS Revolution offers a number of classes, including spinning, pilates and yoga. And Pure Barre offer ballet-style core classes.

I don’t like fried food, sorry Southerns, I just don’t. There are a few places in Savannah which offer a more, how should I say this, ‘non-fried’ menu, but they are few and far between. The places I did go to though, were excellent. Something to note: restaurants tend to close between 3pm-5pm so make sure you check online before you show up

The Grey They’ve converted this former Greyhound bus depot into a super cool retro-style diner experience. The diner section is open from 4pm that offers oyster happy hour, with the main restaurant opening at 5pm

Sentient Bean Nothing too amazing, other than their vegan menu of avocado and quinoa. Literally saved my arteries from some all the fried fats

River Street Sweets A ludicrous amount of pick ‘n’ mix, pretzels and popcorn. Just go in for the smell alone

Local 11ten Seasonal American dishes with Southern touches, fresh seafood caught off the coast and veggies from the nearby farms. Before dinner, go to the restaurant’s rooftop bar, Perch.

Treylor Park Back garden, beer and an all American menu

The Vault A chic Asian fusion spot for creative bites & drinks in the historic Bank of America building.

My Lady and Sons Mentioned to me by Savannah locals as the go to place for Southern comfort food. It’s chef is the famous Southern cook, Paula Dean. It’s a buffet, but brilliant

Leopold’s A hugely popular ice cream parlour. The queue will literally go around the block so head their early or prepare to queue

Tybee Social Club The only place to eat on Tybee Island

Moon River Brewing Company Can be pretty touristy but worth a stop if you’re looking for a good choice of beers and outside seating. The Slow-Sannah IPA was top notch

Wet Willie’s Flavoured frozen margs seem to be a thing in Savannah, and this is the place to get it

The Distillery There’s enough beer choice here to make it hard to make an actual decision. Whatever you order, make sure you get a side of the pretzel bites

The Coffee Fox For a foxy cwaffee

The Wyld Dock Bar A little further out of town, but great for cocktails and bocce (pétanque), on the water

Pinkie Master’s Lounge Dive bar with a juke box, what more do you need?

For something traditional, make sure you stay at any BnB in town. You’ll be well looked after and offered old-school traditions, such as wine on the porch in the afternoons.

I visited Savannah in May 2017