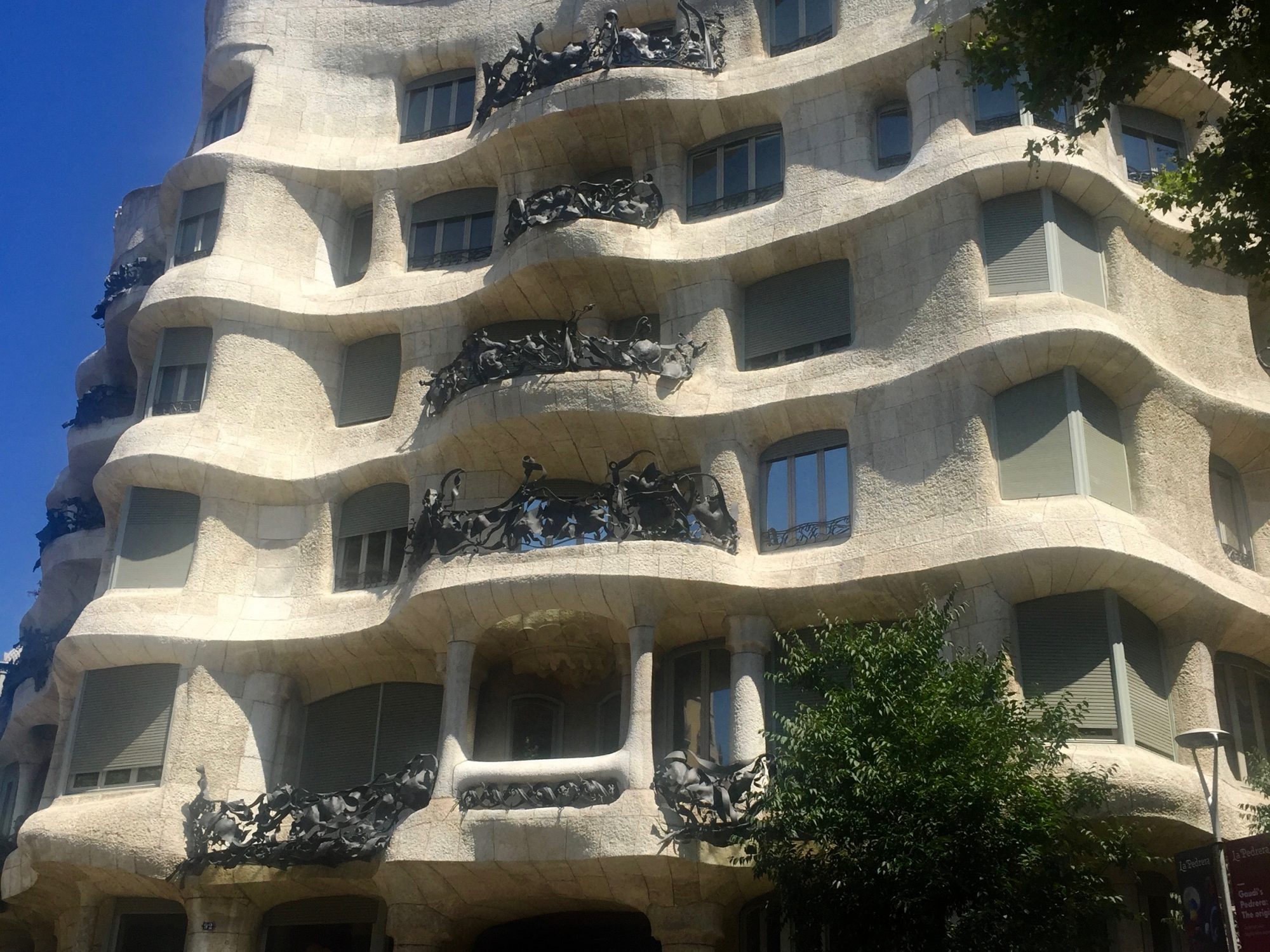 I can’t believe it took me as long as it did to get to Barcelona. It’s has the best of everything – beach, city, culture, food and drink. It is the perfect weekend break.

Get lost in Barcelona’s different districts. Barri Gotic (the Gothic Quarter), is in the centre of Barcelona, and houses many landmarks of the medieval Barcelona in its narrow streets. There are also lots of artisan and boutique stores for jewellery and fashion. And art lovers, you can find a community of art galleries, design studios, and craft shops throughout the quarter.

La Ramblas is a famous street in Barelona which is made up of a series of wide boulevards leading through the city straight to the sea. Perfect for shopping and strolling with it’s street theatre, artists and cafes all the way along.

Parc de la Ciutadella is perfect for a calming stroll away from the bustle of the city. The part also includes a zo and zoological museum.

Casa Mila (or La Pedrera) is the last civil work designed by architect Antoni Gaudí, who’s architecture can be see all over the city.

Magic Fountain of Montjuïc is a fountain located at the head of Avinguda Maria Cristina in the Montjuïc neighborhood. The light show is something not to be missed…apparently. I actually missed it.  The show is on Thursday through Sunday, starting at 9, 9:30, 10, 10:30 and 11

Museum-wise you’ve got the The Miro Foundation which is a museum of modern art honoring Joan Miró; or the Picasso Museum honouring, well, you can guess.

A must see is the Basillica Santa Maria del Mar, the icon of Catalan Gothic; and also the Sagrada Familia which is well worth queuing for.

I didn’t get a chance to go, but I heard that Parc Guell is an awesome trip (it’s a little further out of the city centre) and if you head to Los Bunker del Carmel which is about a ten minute drink above Parc Guell, you’ll have an incredible panoramic view of the whole of Barcelona. Head that way just before sunset with some drinks.

If you trust someone in your group to drive, I would highly recommending getting a Go Car tour. It’s a really fun and funny want to explore the city: https://www.gocartours.com/

In Barcelona I had two of the best meals I’ve ever had. Ever.

Dos Pallios can only be booked a few weeks in advance but make sure you’re organised about it and reserve a table there. It’s an incredible michelin starred Japanese-Spanish fusion restaurant, which is wonderfully understated and relaxed. We sat at the bar and got to watch the masters at work. It’s a must!

Tickets Bar is a wonderfully quirky spot. The menu is all sorts of fun and whether you go for lunch or dinner, make sure you visit their tea room. It’s magical. Tickets is own by FerranAdrià’s brother, so you can imagine the standard of cuisine.

Bestial for a meal on the water

Barcleona is swarming with super cool places to have a drink. I would suggest walking down Carrer de Montacada to Passeig del Born, find a local bar that you like the look of, pop in and have a drink. The Spanish portion controls are very much to my drinking standards.

Even though it’s a tourist stop, Placa Reial is a busy and buzzing square in the Gothic area of Barcelona, and just off the main shopping strip.

If you’re looking for a rooftop bar, I would suggest:

If you’re interested in something a little classier, check out the champagne bar, Can Paixano, or El Xampanyet which is also a tapas place that serves Cava by the gallon. Like I said, classy.

The Lime House is a old school gin bar with all sorts of flavoured gin, including roast beef and wasabi. Punchy.

I was only in Barcelona for 3 days so didn’t want to waste much time sunning by the sea. But the few hours that we did, we went to the Barceloneta Beach, which I think is a pretty popular destination. Honestly, it wasn’t particularly special but it served it’s purpose.

I stayed at an Airbnb in the centre of town which is great. But if I go back, I’ll definitely be staying at Soho House (opening Autumn 2016).